The Carefree Society  began because of a community need. Earlier than 1970 when the Carefree Society first began operations, while the major players in the Support community for Prince George BC’s then forgotten micro community were communicating and forming their developing networks.  It was challenging.  BC Transit began forming PG Transit in 1967, 3 years before our Transportation Society was conceived.   For face to face meetings to happen according to any structure, a percent of members have to attend.  Organizational boards often went a very long time before meetings could happen, some of them had provincial connections that were needed here in the hub city.   Some individuals had emergencies.  Attendees perhaps forgot to pick up others to attend, that happened occasionally.   Persons were sometimes snowed in from October to June.  Mobility devices, Vehicles brake down.  Meeting postponed…. Again and again…  A year or so later, they lose members and regroup with new members due to often low attendance face to face…  Prince George Transit didn’t service all of the area it services now and wasn’t accessible to the ones who needed it.  Well, you can imagine the difficulties it took to get past that. 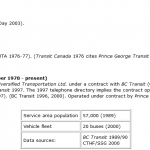 Image from The University of Manitoba, https://home.cc.umanitoba.ca/~wyatt/alltime/p2p-bc.html, data on Prince George transit history

When Carefree came into the picture, even before we began managing BC Transit’s emerging fleet of HandyDART buses, Prince George had an option that was barely accessible, not independently so at best.  The community that had the needs had us as an option to fill their meeting requirements and personal needs, we had to set operational hours.  We were aware of those rider’s needs in our personal worlds.  We began as an affordable accessible door to door service, part of an inaccessible Public Transit System that was trying to accommodate and learn what our micro community of riders’ needs were.   The riders needed to staff the beginnings of Prince George’s developing Community Hub before technology brought us closer.

The involvement of some of our passengers in high level positions of provincial importance at their conceptions brought our connections to BC Transit quickly, as Prince George Transit became the development grounds for Public Transit everywhere in BC.  It had no access or awareness in accessible design and began to realize it with the Prince George community.  The founding members of today’s Non Profit societies used our services for their executive members to hold important Face to Face meetings weekly, monthly, quarterly or annually.  When they had a need for a meeting, Carefree was there for a percent of the attendees to use, those local based provincial groups supported our beginnings for that reason.  When we connected to BC Transit we brought the early Carefree buses to them (which they improved)  and offered our services to the public at large, it was our community in Prince George which influenced British Columbia to become accessible in Public Transit and the whole drive towards inclusion and accessibility.  We were the early messengers for our provincial community.

2 people who used Carefree’s services extensively since its early beginnings spearheaded other organizations which came into the city at the same time and after were Jim Fowlie and Vivian Candy.  Jim would bounce around on Prince George roads in a much less access friendly time on a manual wheelchair adorned with funny slogans, reminding everyone who saw him that people had needs and promoting the city to start thinking about accessibility.  He had Multiple Sclerosis.  Vivian was a double amputee, Lupus had taken her legs but not her independent spirit.  She was also on a manual wheelchair.  Together with others they started the spark that created powerful support centres for the Multiple Sclerosis Community (connecting the local community of MS patients to the province and the nation), and the Handy Circle Resources Society (locally) which has a mandate for all disabilities and a goal of Civic accessibility as per Jim and Vivian’s dreams.  Those two inspired other volunteer managers just with their physical presence, made possible with our services which some the people inspired used as well.   That inspiration slowly spread to the city powers who started thinking access around 1995 and began rolling out the road to today .  It is just a couple of the stories made possible by the development of accessible affordable and reliable transportation being available to use within the community to bring citizens from their homes to do whatever they desired when out and about.  Safe travels Prince George!