Who are the Carefree Board members? 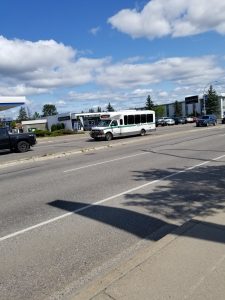 During posted hours we provide a “door to door” service to all our riders!

British Columbia’s first ‘Door to Door’ shuttle service.  The Carefree Transportation Society has managed BC Transit‘s fleet of HandyDART  accessible shuttles since before Accessible Transit was cool in Northern BC.  It was born out of a need to affordably transport patients with chronic and terminal conditions who could not access city transit for medical appointments.  As you can see on our history page, we have come a long way and influenced transit province wide, starting here in Prince George BC.  As you may know, we have always had an Advisory board  to guide the changes we have made as your community home, to destination and back again if that’s the destination desired.  Heck, with consideration and careful planning you can go from home, to destination 1 then to destination 2, then to shopping late on Thursdays then home all good. this door to door shuttle runs in Prince George, as well as in many communities serviced by BC transit.  Now onto the main body of the post you came here to see.  These are the Advisory Board’s Bios to follow below, Post to be updated as I get documents. After that, each AGM if info changes, it will continue to be updated.

Steve works for AiMHi Prince George in the Infinite Employment Solutions department. There he facilitates the “Common Goods Training” program. He has 3 adult kids and 4 grandchildren. He also enjoys hiking, running, biking and weight training in his free time.  He’s basically into anything active. He’s served on many boards and has been employed for many non-profits. He enjoys the Carefree board because it is a very well run organization. The people he works with rely on supported transportation for engaging in the community. He began in 2017 as as a member on the executive board described below (stay tuned for updates) for a year before becoming president in 2018 at that Annual General Meeting.  2021 will be his final year.

Terry joined our board around 2005, filling many positions along those last 15 years. He is retired from his position at CNIB Northern BC, but volunteers his time with some more provincial and local organizations and has been active for quite a while.

Unfortunately, volunteers are always in short supply so he endeavours to contribute where ever he is able too. Hopefully, there are others who will consider joining him to help needy organizations in our local area.

When Stephanie Madeline Dix was four years old, she was going to the Child Development Centre in Prince George BC.  She has had Cerebral Palsy since birth. There, she was learning how to walk and receiving speech therapy. Her Mother was on the advisory committee behind the Carefree Society in the 1970s and got her on the list before HandyDART was what it is today. Steph and her mom had watched the Carefree Society and the service we provide evolve over the decades. Now, 45 years later and after growing with HandyDART, she still enjoys riding the buses and is excited about helping inspire transportation changes for all the people who use it with her presence on the board.

I was diagnosed with Multiple Sclerosis in the year 2000, on a sunny day in June, while living in the Northern Health community of Prince George. I had walked into a wall during a really stressful time in my life, the corner intersecting the wall and the hall beyond to the bathroom. I then realized I was half blind while examining the cut above my right eye from the impact. In a panic, I rushed to the optometrist that was just down the street from where I lived. The optometrist directed me to a specialist. I think that was where I heard the word “Optic Neurosis” said more than once, but it meant nothing. What mattered was the specialist giving me advice about my non-existent ‘BC Health Insurance Plan’ which I had let slide for well over a decade of health. It is highly illegal in BC to be without because of the high price of medical visits. Her 20-minute exam that explained nothing to me gave me a $400 bill to be paid as soon as my appointment was over. I had no credit cards. I called my understanding employer who gave me an advance and cut my time at work. The period for the rest of 2000 to the end of 2004 was a rough time of employment and life changes that by April 2002, led to my unemployment and at the height of the MonSter in my mind fueled by depression and a progressing mental illness undisciplined and unleashed upon society with disastrous results and a fiery relationship that took my life by the ‘short and curlies’ and spun it around…  2003 saw me kicked from my doctor’s office for refusing MS and other Medications for Cannabis.  The MS Clinic did the same.  I was homeless for a short time, learning about food banks and shelters in Prince George.  I finally got my head on straight, quit tobacco (at 35 years of addiction kicked at 39 years of life) which lead to me facilitating the local Multiple Sclerosis Self Help Support Group through 2005 and beyond. By 2006, a movement of ‘Patient Advocates’ was forming in BC. My doctor and the MS clinic called me back for an exam, Northern Health was changing with BC Health thanks in large to the Patient Advisory group that would later become the Patient Voices Network just before 2010 & I had been a part of it since my introduction to them around 2007, well much earlier with the movement before that allowed our medical teams to form with all chronic and terminal illnesses that allowed me back for treatment I was free to refuse with no penalty. My shared MS community gained the medial support team and choices that year. We also gained true medical support for tobacco cessation thanks to a study I was subjected to between 2004 and 05 which lead to my ‘Quit’. Thank you for continuing to improve, Northern Health.

2010 to around 2015 saw many changes in my personal life and a spur to my ‘professional’ life. In 2011, thanks to a fire in an adjacent unit that led to Prince George’s first and largest residential disaster in November, I was homeless for a month. A few days before January and I found a new home for me and my 2 cats. One has since left on his journey; the other one has become more affectionate but I know she’ll be leaving soon. Life is like that; cats are outlived by owners 98% of the time. But that’s long after 2015. After the housing found life was pretty routine, I was keeping my MS’ed up brain kind of focused working for Handy Circle Resources Society, networking non-profits in Prince George to the Province, taking classes at Make a Change Canada’s national distance training called the IBDE course and restructuring the local MS community after the closure of our local MS Society of Canada Chapter office.  I also sat on Prince George’s ‘Advisory Committee for Accessibility’ since 2009 and took a mandatory departure from that board in 2016.  I’m actually back on the committee in 2020 after successfully finding others to help us rebuild and restructure the MS community in Prince George. I’m also with the BC SUPPORT Unit (Patient Council in Vancouver), manager of several projects at Handy Circle including the Prince George StopGap project. I also built the website for the PG Carefree society, manage the Blog behind it and Volunteer Prince George’s website. I sit on those boards, as ‘Treasurer’ in both.

Linda was born in Prince George with special needs and is very active in the community. She is on the Special olympics team with 5 and 10 pin bowling. Linda recently competed in the World Games in Abu Dhabi in 2019. She is also the chairperson of the Accessible Transit Action Committee, a public transportation advisory group concerned with accessible transportation improvements through the city of Prince George since 1995. She lists her hobbies as watching hockey games, reading, listening to country music, and helping people in Prince George. She has been a Carefree board member since the late 1990s, she also is a ‘Camp Leader for the Ness lake Bible Camp and a First Aid attendant for the Prince George Spruce Kings.

Stay tuned for more bios to come, like the one above. This post will be updated soon. The board members need to send bios to me to post, hopefully before a future AGM potentially changes who is on the board and I have to repeat my request for new bios to update this page. Thank you for providing a bio and thank you viewers of this post, for reading our stories.